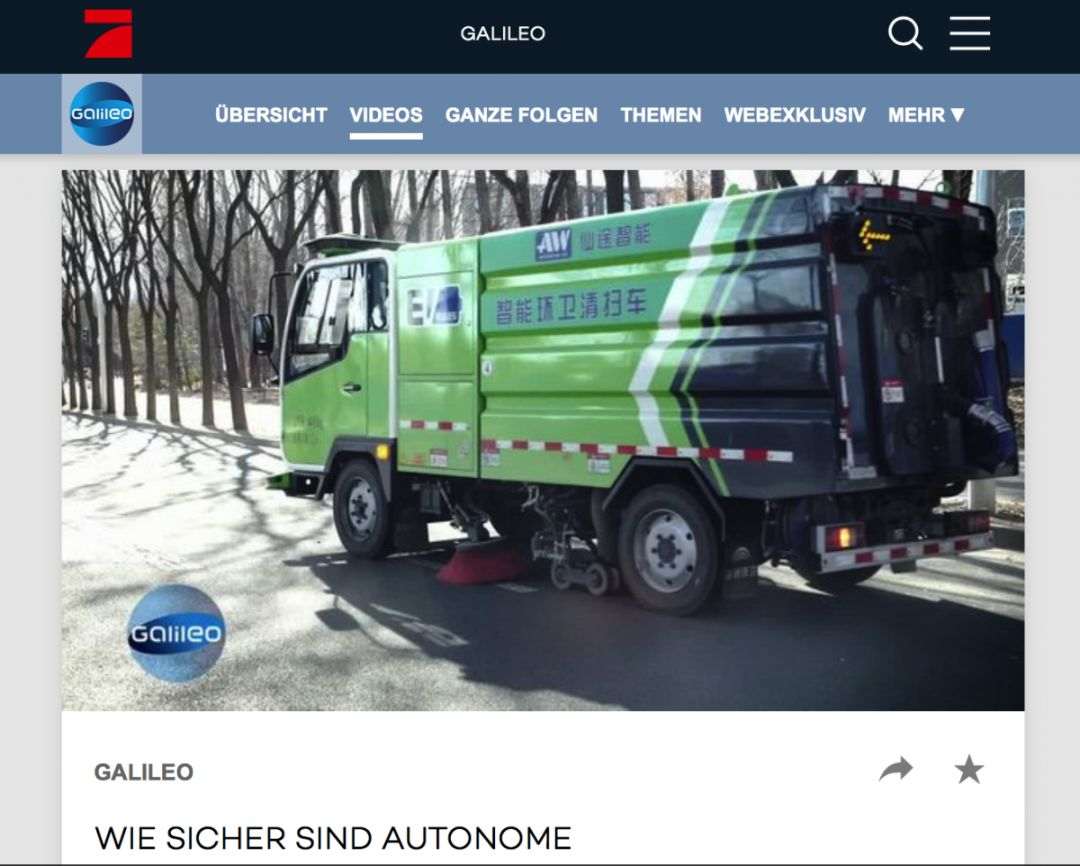 Galileo on German TV station ProSieben: The team from the top-ranked German program traveled all the way to Beijing and Shanghai to interview Autowise.ai. It aired an in-depth multinational report on “Autonomous driving vehicles used for street cleaning”, and the special achieved 12% viewership.

The official video on the website features Auwowise.ai’s autonomous sweepers

More than 70% of German citizens are loyal ProSieben viewers. Galileo is one of the station’s top programs, and has been advocating for truthful knowledge-based reporting for more than 20 years, gaining it the label of being Germany’s largest knowledge-based radio and magazine.

Galileo journalists went on to experience the daily operations of the autonomous sanitation vehicles first-hand, testing whether the safety of the vehicles could be guaranteed — which is the top concern for the public. After witnessing a number of reliable autonomous operations, the journalists, who had insisted on testing the “Made in China” products with strict standards, scored satisfactory results for the experiment in the end.

In addition, the journalists also visited Autowise.ai’s office in Songjiang, Shanghai, to experience the advanced technology of the autonomous driving system. They got to see how sensor groups including LiDARs, millimeter wave radars, cameras, ultrasonic radars, etc. operate in a sensitive and timely manner, as well as how Autowise.ai engineers have mastered dynamic path planning, cloud fleet management, and big data operation platform. Prof. Dr. Ferdinand Dudenhoeffer, the German automotive economics expert at the University of Duisburg-Essen Ferdinand renown as the “godfather of automobiles”, remarked that autonomous driving sanitation vehicles will not only upgrade our traffic and environmental conditions, but also attract more German experts to China more frequently, and thus promote a more open exchange of technology between Germany and China.

Autowise.ai measured up to the rigorous tests of the top-ranked German TV program and delivered satisfactory results. With high “Made in China” standards and its advanced technology, the company is confident about meeting the challenges of the international stage.